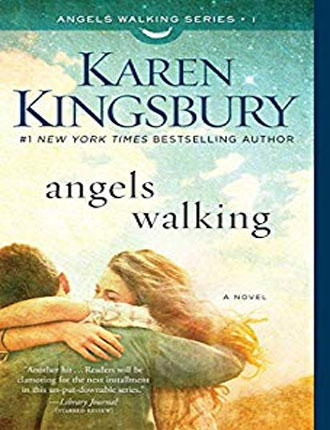 Book One of The Angels Walking Series
A brand-new series about second chances — a dramatic story about a washed up baseball player, the love he left behind, and the miracles that might save them both.
When former national baseball star Tyler Ames suffers a career-ending injury, all he can think about is putting his life back together the way it was before. He has lost everyone he loves on his way to the big leagues. Then just when things seem to be turning around, Tyler hits rock bottom. Across the country, Tyler’s one true love Sami Dawson has moved on.
A series of small miracles leads Tyler to a maintenance job at a retirement home and a friendship with Virginia Hutcheson, an old woman with Alzheimer’s who strangely might have the answers he so desperately seeks.
A team of Angels Walking take on the mission to restore hope for Tyler, Sami, and Virginia. Can such small and seemingly insignificant actions of the unseen bring healing and redemption? And can the words of a stranger rekindle lost love? Every journey begins with a step. 384-pages. 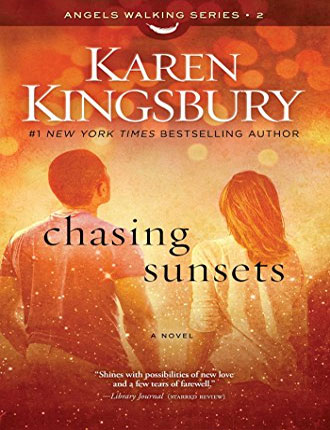 Book Two of The Angels Walking Series
Growing up in a comfortable home, Mary Catherine wanted for nothing. Though she loves her wealthy parents, their lifestyle never appealed to her. Instead, Mary Catherine pursues meaning through charity work, giving away a part of herself but never giving away her heart.
Mary Catherine lives in Los Angeles with her roommate, Sami, and volunteers at a local youth center with coach Tyler Ames and LA Dodger Marcus Dillinger. Despite Mary Catherine’s intention to stay single, she finds herself drawing close to Marcus, and their budding romance offers an exciting life she never dreamed of. That is, until she receives devastating news from her doctor. News that alters her future and forces her to make a rash decision. 336-pages.

Book Three of The Angels Walking Series
Against the advice of her doctor, Mary Catherine moves to Uganda to work at a new orphanage. Whatever time she has left, Mary Catherine wants to spend it helping children—especially since she is unable to have children of her own. The only problem is Marcus Dillinger, the Major League Baseball player she was never meant to fall in love with. But neither Marcus nor Mary Catherine’s other friends—Tyler Ames and Sami Dawson—know just how serious her heart condition is.
Still, Marcus suspects something isn’t right. After months of silence, a divinely timed letter from Mary Catherine leads him on a desperate life-or-death mission to get her to a US hospital before time runs out. Meanwhile, as Sami and Tyler prepare to marry, the group receives shocking news that changes everyone’s plans.
The team of angels walking is busier than ever in this epic battle between life and death. Brush of Wings is a poignant tale of love, sacrifice, and the power of faith. 352-pages.

Book Four of The Baxter Family Series
A fresh new look for the best-selling series from America’s number-one inspirational novelist, Karen Kingsbury. Fans will enjoy a personal note from Karen and Gary Smalley as well as discussion questions for book group use. Revisit the Baxter family in all their life-changing events, or share the series with someone who hasn’t discovered it yet. The Redemption series won Christian Retailing’s 2005 Retailer’s Choice Award for Best Series! In addition, Rejoice was a 2005 Gold Medallion Award finalist!
This latest release in the Redemption series reunites readers with the continuing saga of the Baxter family. Brooke Baxter has achieved everything this world has to offer—a prestigious career, a beautiful home, and two wonderful children. Her recent return to her faith is an encouragement to her family. But if she faces tremendous loss, can her fledgling faith and her rocky marriage survive? 380-pages. 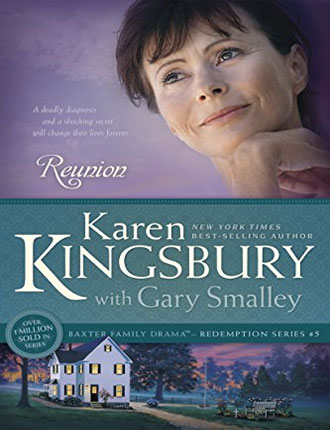 Book Five of The Baxter Family Series
A fresh new look for the best-selling series from America’s number-one inspirational novelist, Karen Kingsbury. Fans will enjoy a personal note from Karen and Gary Smalley as well as discussion questions for book group use. Revisit the Baxter family in all their life-changing events, or share the series with someone who hasn’t discovered it yet. The Redemption series won Christian Retailing’s 2005 Retailer’s Choice Award for Best Series! In addition, Reunion was a 2005 Gold Medallion Award finalist!
This touching story allows us to see into the lives of the Baxter family as Erin and Sam attempt to adopt a child. As the family looks forward to a heartwarming reunion, they find out that Mr. and Mrs. Baxter have a secret that could change their lives forever. 393-pages. 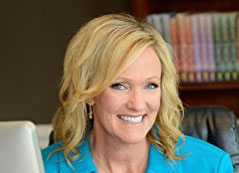 #1 New York Times bestselling novelist, Karen is America's favorite inspirational storyteller, with more than twenty-five million copies of her award-winning books in print. Her last dozen titles have topped bestseller lists and many of her novels are under development with Hallmark Films and as major motion pictures. Karen is also an adjunct professor of writing at Liberty University. 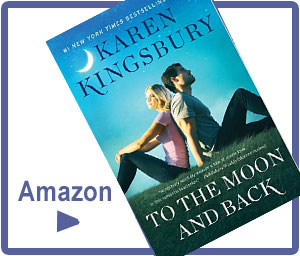 Brady Bradshaw was a child when the Oklahoma City bombing killed his mother. Every year, Brady visits the memorial site on the anniversary to remember her. A decade ago on that day, he met Jenna Phillips, who was also a child when her parents were killed in the attack. Brady and Jenna shared a deep heart connection and a single beautiful day together at the memorial. But after that, Brady never saw Jenna again. Every year when he returns, he leaves a note for her in hopes that he might find her again. 384-pages.